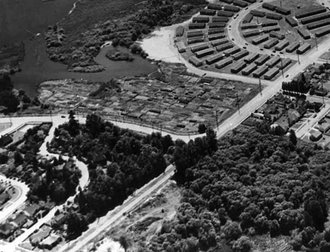 THE STORY OF YESLER SWAMP

Yesler Swamp is an environmental treasure in the heart of a great city. Within a few yards of major streets and busy neighborhoods, it preserves rich wonders of wildlife—a beaver dam, eagles and herons, and 100 species of birds.

The story of Yesler Swamp opens windows on the city’s early history, a major pioneer, and the evolution of Seattle’s lakes and waterways. Now, the neighboring community has come together to preserve and protect this unique urban ecosystem and make it accessible to the public.

It was not always a swamp. It began as the hub of a sawmill and lumber business operated by Henry Yesler, two-time Seattle mayor and frontier entrepreneur. Yesler is among Seattle’s most famous pioneers, the one who built the famous “skid road.” Yesler Terrace, Yesler Way and other downtown Seattle landmarks are named for him.

If Yesler is best known for his enterprises in the city’s early center, he had other ambitious business interests. Around 1888, Henry Yesler’s company built a second lumber mill on the north shore of Union Bay. It was a little-settled spot on a stretch of original waterfront. Logs cut from the shores of Lake Washington were floated to Yesler’s mill run to be sawed into lumber. Yesler’s mill operations began the transformation of a thickly-forested waterfront, where Indians and camped and fished, to a dense urban neighborhood.

Before Yesler and a handful of other white settlers arrived, the fringes of Union Bay were heavily forested. Fir trees over 150 feet tall towered over the water’s edge. For hundreds and thousands of years, Yesler Swamp was covered with water. It was not a swamp, just a bend in Union Bay, the western arm of Lake Washington. Union Bay was shallow, only 16 or 17 feet at its deepest.[1] On its north shore lay a wild marsh where over the centuries, downed logs, plant debris and soil had created rich peat deposits one hundred feet deep.[2]

Over a century after Yesler’s mill burned and closed for the final time, a small group of neighbors began to look more carefully at the wetland that was almost on their doorstep. They found unexpected wonders.